To make the Drop Pancakes: 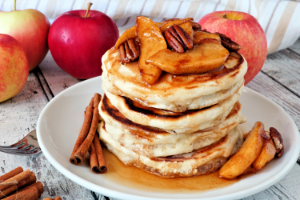 • Sift the flour and baking powder into a mixing bowl, add the sugar, milk, egg and salt then whisk together forming a smooth thick batter

• To cook the pancakes heat a non-stick pan with a splash of oil and drop small amounts of the batter onto the pan spacing them well apart, once bubbles begin to form on the pancakes turn them over and cook for around 1 ½ minutes
• Choose your fillings, traditional sugar and lemon, banana, orange or chocolate. The list is endless but here are some of my sweet and savory favorites!

To make the maple apple, cinnamon and sultana compote:

• For the compote put the apples vanilla pod, butter, sugar, cinnamon and a splash of water in a saucepan cook stirring often until the apples turn into a chunky puree